Posted on September 27, 2015 by rebekahgolden

There are a few organizations I respect completely. ACLU is one. EFF is another.

EFF put out an anti-tracker plugin that installed in your browser cuts back on how much sites can see of your browsing history. Privacy is important. Consider Privacy Badger.

Posted on September 23, 2015 by rebekahgolden

Preheat oven to 400 F and line muffin tin with papers.

I like to use my 1/4 cup measuring cup to scoop batter into the muffin cups. Sprinkle the tops with toasted sesames.

Bake for approximately 15 min or until toothpick comes out clean. Let cool a bit before transferring to a plate.

Texture turned out a bit sandy due to the tahini. Cardamom gives it a nice crisp taste. Palate cleanser.

Posted on September 15, 2015 by rebekahgolden

Once upon a time a software company posted pictures of their employees. The end.

Or not. One of their engineers happened to be a beautiful woman. Out of nowhere she started getting comments and messages, “You don’t look like an engineer, are you sure you’re not a model they hired to pretend to be an engineer?” And ruder. Her response? #ILookLikeAnEngineer

When I first started down the path of becoming a programmer people would tell me that the money wasn’t good (it was just after the dot com crash) or the hours were awful or any number of negatives. Then they would say wouldn’t you rather be a teacher? Or a project manager? Or a product owner? Or a designer? No, actually, I enjoy the act of programming.

A week later my boss at Billups asked me if I’d seen #ILookLikeAnEngineer. I showed him my post. He said they wanted to help with the Indiegogo campaign. Then he and the owner of Billups threw the weight of the whole company behind helping get the best possible out-of-home billboard campaign for the project. The team handled the campaign from conception to execution, organizing the printers, getting good deals through contacts in the area, making the whole thing bigger and better pro bono. Yes, pro bono, no charge for our services.

We got the message all over the Bay area – we have coverage in Oakland (Coliseum), Bay Bridge, 101 (Santa Clara & Palo Alto), downtown SF, BART stations. Media formats include: Bulletins (static & digital), Metro-Lights, 2-sheets. (Yes, I’m quoting a coworker who was talking about what we did. I just build the software that helps organize the data and process, everything I know about the process comes from amazing people like Kristana.) AND we partnered with a great data company called ESRI that makes it possible to provide a density map of people in the Bay Area that had a Computer / Mathematical focus for strategic targeted planning. (They also often host the local #golang meetup.)

All that launched this week. What started with me caring about how software engineers who don’t fit the stereotype are viewed became the company I work for doing amazing things for the community. The official press release is here. And yes, they stuck my face on the billboard. Luckily I wasn’t alone and one of the other women who builds Billups’ software was willing to have her picture taken too. So here we are, looking like engineers before going back to work programming in Go, writing tests, creating data structures, building databases, and maintaining our legacy PHP codebase. 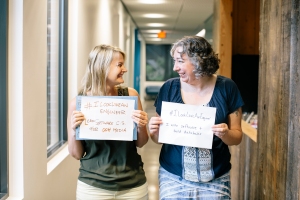 This is a personal weblog. The opinions expressed here represent my own and not those of my employer.